I met Kir and Guy at Caroline and Joe’s wedding back in June last year. After the wedding, they saw the preview photos I posted and decided to get in touch to see if I would be their Manchester Town Hall wedding photographer. In their words: “We’ve just seen your photos on Facebook and both remarked that they are by far the best wedding photographs we’ve seen. And no, we are not just saying that to butter you up!” I’ve got to be honest…I love receiving e-mails like this! They went on to tell me about their wedding plans, and how after getting married in Manchester Town Hall, they were taking the party to Kosmonaut; one of their favourite bars in Manchester. It sounded ace. It WAS ace. 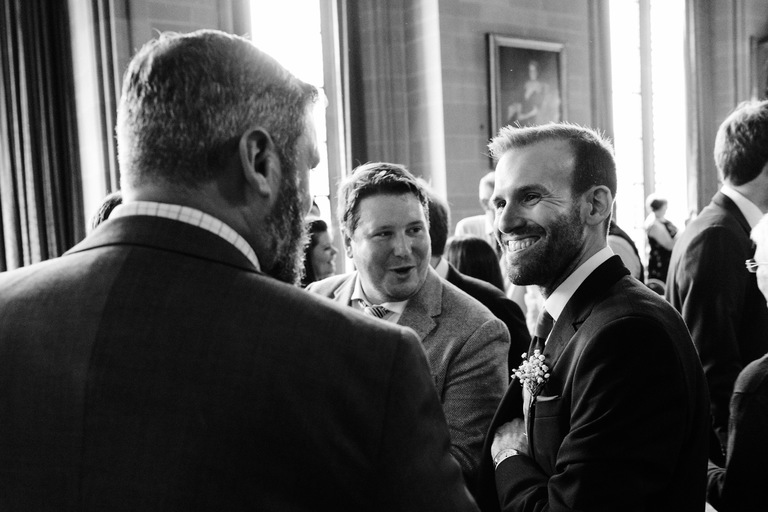 If you’re looking for your Manchester Town Hall wedding photographer, click below and tell me all about the two of you and what your big day plans are!

Kir started her day off in style at the Abode Hotel. In the Johnny Cash suite, no less. It’s a fantastic looking hotel, and the suite they had booked out was incredible! So much natural light. Cool photos of Johnny Cash littering the walls. Incredible views out over the city. I think it was safe to say we all had a great morning there. The time whizzed by and we were soon hustling downstairs to get the taxi to to the town hall.

Manchester Town Hall is, for those who like to know this kind of thing, a Victorian, Neo-Gothic municipal building. It’s HUGE! And beautiful. And its Conference Hall is where Kir and Guy tied the knot. Both looking like all their birthdays had come at once.

After their nearest and dearest had showered them with confetti on the town hall steps, we all piled into the coaches that were waiting to whisk us away to Kosmonaut. It’s a great place situated in Manchester’s cool Northern Quarter, and was a perfect venue for these guys to carry on their wedding party.

Once everyone had had chance to grab a drink at the bar, people soon wandered through to the next room where they were met with long benches filled with buckets of craft beer. Sounds pretty amazing so far, right!? For the next 30 minutes or so, the guests laughed their way through the speeches. Plenty of gags, plenty of roaring laughter, and the occasional shocking revelation!

The night ended with everyone downstairs in the basement with loud music, glow sticks and some pretty vigorous dance floor action. Well played, everyone. Well played!